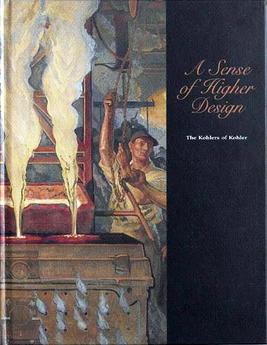 The book I wrote for Kohler Co. relates the history of the company, the Kohler family and the Village of Kohler, Wisconsin. Here's a link to the first chapter:  CLICK HERE

I have written 22 books — 18 corporate and family histories and four trade books. A sampling includes:

The American Club: A Centennial History (CorporateHistory.net, 2016)
The saga of one of the world’s most unusual nonprofit insurance companies, the American Steamship Owners Mutual Protection and Indemnity Association (known in the maritime world as “The American Club”), which provides liability coverage for oceangoing ships. All About Shipping, a maritime-industry news service, called the book “masterly” and said “every page crackles with fresh aspects of marine and social history.” Here’s a link to the book:  CLICK HERE

From Root to Vine: An Opici Family History (self-published by the company, 2016)
The history of the Opici family and its company, the Opici Wine Group, national distributors of wine and spirits.

The History of JPMorgan Chase (self-published by the bank, 2012)
The story of the bank and its many predecessor organizations, dating back to the founding of The Manhattan Company by Aaron Burr in 1799. Amazon described the book as “beautifully presented and profusely illustrated.”

Our Family Tree: The Towers Watson Story (CorporateHistory.net, 2012)
The history of professional-services company Towers Watson and its predecessor firms. The book won a 2012 APEX Award of Excellence from Communications Concepts, Inc., based on excellence in editorial content and graphic design. It was one of 11 winners among 200 entries in the “Custom Publishing” category.

The Graybar Story (Greenwich Publishing Group, 2009)
The history of electrical-products distributor Graybar Electric. In 2010, the book was one of eight winners of a prestigious Grand Magnum Opus Award from the University of Missouri School of Journalism/ContentWise for excellence in corporate communications. It took top prize in the “Other Print Publication” category. Graybar issued the book not only in print, but also online in a PDF. Here’s a link:  CLICK HERE

The Gottesman Family (Bellemore Books, 2005)
The story of the Gottesman family (major New York philanthropists) and their company, Central National-Gottesman Inc., a leading wholesaler of paper.

A Sense of Higher Design: The Kohlers of Kohler (Greenwich Publishing Group, 2003)
The history of plumbing-products manufacturer Kohler Co., the Kohler family and the Village of Kohler, Wisconsin.

Doing It My Way, co-authored with Winton M. Blount (Greenwich Publishing Group, 1996)
The autobiography of Winton “Red” Blount, CEO of construction firm Blount International, Alabama philanthropist and U.S. Postmaster General from 1969 to 1972. The Montgomery Independent, one of the state’s leading newspapers, described the book as “highly readable” and said “the force of Mr. Blount’s personality comes through on every page.”